June was pretty much a bust astronomically speaking; short nights and lots of clouds and rain. Not to mention the small tornado that touched down at Dark Ridge on June 15th. Fortunately no one was injured and only minor limb and tree damage to homes at BMP. Unfortunately there are hundreds of downed trees blocking the trails and roads around Dark Ridge. See photos below for idea of how extensive the damage was. 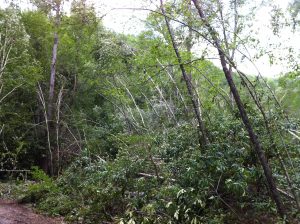 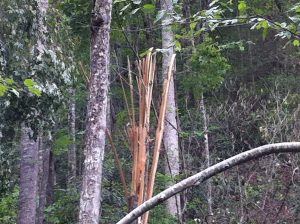 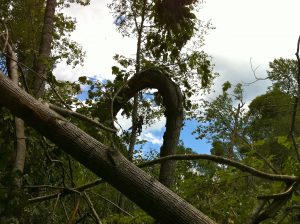 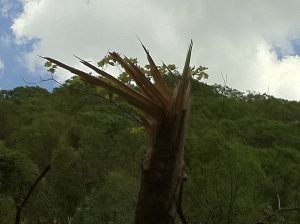 Now on to July. This month the planets will be putting on a fairly good show but most of the action occurs in the pre dawn skies. Brilliant Jupiter rises around 2 AM on July 1st and around midnight at the end of the month. Venus and Mars are also early risers this month.

In the evening sky we have fantastic Saturn setting in the south west after dusk. Check out the rings through binoculars or a small telescope. Saturn is easy to spot as it is right next to Porimma, a bright star in the constellation Virgo. Neptune and Uranus are also visible but you will need good binoculars, an accurate star chart and lots of patience to spot them. You can get star charts at the major astronomy websites like Space News, Astronomy Magazine and Sky & Telescope Magazine.

Meteor activity will be picking up this month and most clear nights you should easily see 1 or 2 per hour. The Southern Delta Aquarids shower begins to increase the number of meteors late in the month and peaks on July the 30th. From a dark site you should be able to see 15 to 20 per hour at the peak. Its a very broad peak so meteor activity will be higher from mid July through the end of August.

Don’t forget to look for the International Space Station (ISS). There will be good visible passes on the nights of July 1st through the 5th. The brightest pass will be on the evening of the 3rd at 9:30 and should provide a nice complement to Fourth of July fireworks. After the 5th the next group of visible passes will begin on July 23rd but will all be in the early morning. Check www.heavens-above.com for detailed information on ISS and other satellites that will be visible. The final space shuttle flight is scheduled to launch on July 8th. Check out nasa.gov or heavens-above for latest information. When it docks with the ISS it may be visible as a dimmer dot approaching the very bright dot of the ISS.

Thats all for this month. Remember; turn out your outdoor lights at night and go out and enjoy the dark skies at Balsam Mountain Preserve.