Finally the air is starting to clear and nights are getting longer! There have been some very nice nights in the past two weeks to observe the wonders of the night sky. The moon is new on July the 30th and August 28th so take advantage of the days before and after the new moon to observe without that pesky light bulb in the sky.

We start the month with the remnants of a minor meteor shower; the Delta Aquarids, bringing the occasional flash to the sky as August begins. We were in the observatory the night of July 29th and saw several bright meteors cross the sky. Unfortunately one of the best showers of the year, the Perseids, peaks on August 13th just in time for the full moon. You might spot some bright meteors so look up after midnight if skies are clear.

Saturn is low in the west-southwest and will be lost to the haze later in the month. You should be able to spot the ringed planet through binoculars or telescope after dusk.

Jupiter rises around midnight in early August and by 10:00 PM at month end. It will be the brightest object in the sky most of the month (not counting the Moon) so try and spot its brightest moons through binoculars or a small scope.

Venus is behind the sun most of the month and not visible. Mars makes a weak appearance around 3 AM but at only magnitude +1.4 might not be worth staying up for.

The Pleiades are one of the prettiest constellations in the sky. Look for a tight grouping of 7 bright stars just above the moon in late August. Its rise signals we are nearing the end of summer and the dark and dry days of fall are just ahead.

A word about the weather. Obviously we need clear skies to see the wonders of the night sky. If you click on the “location” tab at the Dogstar Observatory web site you will see a curious object that looks like this:

This is the output of a sky prediction program run by Attilla Danko. If you see blue bars lined up in each category for the time you will be out there is a good chance you will have clear skies. For details on how it works click here.

If you are interested in the latest weather information at Balsam Mountain be sure to click on the “weather” tab. It will bring up the latest and historical data from the official Dogstar weather station. This information is used by a number of other local weather services and is also viewable at WeatherUnderground.com by searching for site KNCSYLVA4.

These are the weather stats for the year to date: 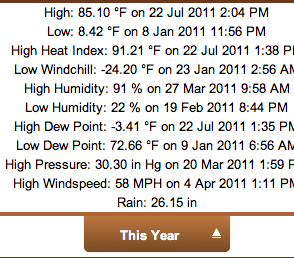 Wind speeds are probably under reported due to the sheltered location of the anemometer. That high of 85.1 degrees sure looks good compare to the rest of the country!

Thats all for this month. Remember to turn off any outside lights at night (its actually required by BMP covenants) and go out and enjoy the night sky.