December will be a great month for viewing the wonders of the night sky. I will cover the highlights here but encourage everyone to do your own exploration on the may great websites that cater to the amateur astronomy community. Wikipedia does a good job when you look up specific objects. Also check www.astronomy.com and www. space.com.

If you got up early and tried to see Venus, the crescent moon and Spica this morning and all you saw were clouds it was not my fault! The beautiful clear fall skies of last night turned cloudy around 3 AM this morning. I did hear from folks in Atlanta and Knoxville who managed to get a good cloudless view. Venus will be brilliant for the next few weeks getting higher and higher in the sky until Christmas day when it will be at its highest in the morning sky.

Behold mighty Orion the Hunter! This month the king of constellations graces the early evening skies in the east. One of the largest and most visible of the constellations, Orion is also home to some of the most photographed and studied celestial objects. (see graphic below) I will mention just three them; the brilliant stars Betelgeuse (Orion’s right shoulder) and Rigel (his left foot) and the great Orion Nebula. Betelgeuse is the twelfth brightest star. Its a massive red supergiant star nearing the end of its life. When it explodes (could be tomorrow or in next 100,000 years) in a supernova it will be visible during the day. Rigel is a blue supergiant and is the sixth brightest star. The great Orion nebula (M42) is located in Orion’s sword between the bright stars Alnitak, Alnilam, and Mintaka. Its a cloud of dust and gas left over from an ancient supernova explosion that is being ‘recycled’  (the universe was green before green was cool!) into new stars. Its visible to the naked eye as a fuzzy white patch just below the left most star in Orion’s belt and a beautiful site in binoculars or a small telescope. Orion will be visible all winter so I will cover more of Orion’s wonders in the coming months and try to post some images I have taken at Dogstar. 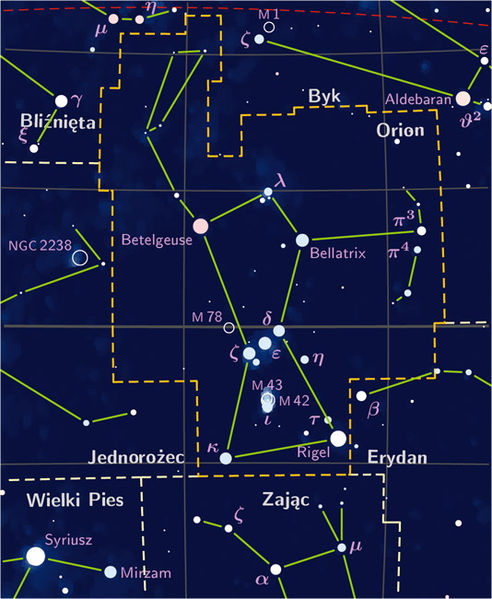 Jupiter is still hanging out high in the southern sky. It is easy to spot right after sunset and sets just after midnight. Its still the brightest object in the nighttime sky to be sure to give it a look through binoculars and see if you can spot any of its moons.

And now to on to the Moon. On the night of December 20/21 the Moon passes through Earth’s shadow and a total lunar eclipse will be visible all across North America. Lunar eclipses occur at least twice a year someplace on the earth but only once every few years for a given location. They occur much more often than do solar eclipses. To view the eclipse this month you will have to stay up late; totality (when the moon is completely within Earth’s shadow) will begin at 2:41 AM on the 21st and lasts 72 minutes. Before and after totality you can see the moon gradually disappear and then reappear as the shadow takes a ‘bite’ out of the moon. During totality the moon will take on a beautiful orange-red hue from the light reflected off the Earth’s atmosphere.

Speaking of the moon, the full moon of the eclipse (lunar eclipses always occur when the moon is full) is special for another reason. Based on ancient folklore its also a ‘blue’ moon since its the fourth full moon of a season (fall). The definition was changed in more recent times to apply to the second full moon in a month. Both are relative infrequent occurrences giving rise to the phrase ‘once in a blue moon’ meaning something that is relatively rare. Other lunar designations like ‘hunters moon’ or ‘harvest moon’ are similarly based solely on the chance alignment between the lunar cycle and our often changing calendars and thus have no real astronomical significance. The full moon of the 20th/21st barely makes the traditional definition since winter officially begins with the winter solstice at 6:38 PM on the 21st.

Thats all for this month. Turn out your lights and go out and enjoy Balsam’s beautiful night skies.